Above: The stunning view of the lake-lined valley linking Verdant and Campus Passes.

A moderately difficult scramble with plenty of boulder travel. Continuing past the summit to Sorrow's eastern tip involves difficult and exposed scrambling.

I had never heard of Mt. Sorrow until Steven suggested it to me as a potential way to turn our traverse of Mt. Edith Cavell into a two-summit day. It sounded like a reasonable idea as Sorrow is mostly a traverse from the descent line of Edith Cavell, but after fighting our way up and over the latter's famed east ridge, we were physically and mentally exhausted and just wanted to get on with things. The peak stayed in my mind for a few years before I returned to the area to tackle nearby Verdant Peak, during which I spied what looked like a far easier ascent line for Cavell's western slopes to the ridge linking her and Sorrow. Curiosity and the fantastic views this area delivers every time ensured that I would be back to explore.

While a definitive origin proved elusive, the name “Sorrow” is likely inspired by the unfortunate fate of Edith Cavell and its aftermath. Edith was a dedicated nurse who was executed by the Germans for aiding the escape of 200 Allied soldiers during WWI (details↗). Her trial received international attention, and the execution elicited widespread condemnation.

Although the name comes from a dark place and portends misery and sadness, the experience for climbers or scramblers should be the exact opposite. Most ascents are made via the intimidating northeast face, a 5.9 climb that begins not far from the main Edith Cavell parking area and narrows dramatically as you near the summit ridge. However, if you're not looking to be terrified, a western approach to the mountain offers excellent approach trails, a solid/moderate ridge to ascend, an awesome ridgewalk to the summit with killer views, and then an easy descent back to the valley. And, should you require a little more spice in your day, continuing beyond the summit to the east provides some fun, airy, and difficult hands-on scrambling along a narrowing ridge overlooking Cavell Lake, Angel Lake and the Angel Glacier. Highly recommended!

Note that the ascent and descent routes described here also work very well for Edith Cavell itself, and are far superior to the traditional climber's descent/scrambling route described elsewhere, which is a rockfall nightmare.

An ascent of Mt. Sorrow begins at the Astoria trailhead which shares a parking area with the Cavell Hostel. To reach this area, turn onto Hwy 93A from the Icefields Parkway (Hwy 93) just south of the park gates (outside of the town of Jasper); you'll see signs advertising the Marmot Basin Ski Area. Traveling south on Hwy 93A you'll want to take a right turn onto the Edith Cavell Road, and then follow this winding roadway to the parking area (which you'll find on your right, across from the hostel). If you reach the main day-use area at Edith Cavell you've gone too far. From the parking area follow a ramp down to the west, cross the bridge at the base of Cavell Lake and then follow the trail to the right on the other side to begin your trek along the Astoria Trail.

Important note for 2017: Parks Canada has some annoying access restrictions in place for this area to facilitate construction work. Make sure you plan accordingly.

The Astoria Trail is a bit of a highway that is often used by outfitters supplying the Tonquin Valley, and you should be able to swiftly make your way down the 4km to the obvious turn-off for Verdant Pass on the left (photo #2). If you manage to zone out completely and miss the trail, you'll know you've gone too far upon reaching a solid bridge crossing over the Astoria River near the base of Throne Mountain. You'll follow the Verdant Pass trail through a forest for a little over 3km as it slowly trends upwards, gaining close to 400m in elevation before the trail nears Sorrow's western slopes. Around that point, you'll find yourself mere steps away from a bouldery ascent line as pictured in photo #5. Time to head up!

The Ascent and a Grand Ridgewalk

Ascending Mt. Sorrow's west ridge is a very straightforward affair. Like most of the peaks I've scrambled in this area (such as Verdant and Hardisty), the western slope is made up largely of quartzite boulders in stable clusters that provide a useful series of steps to quickly gain elevation up the mountainside. There are no mysteries to the routefinding, although after gaining the first few slopes on the ridge I was thrown-off by a seriously foreshortened pyramid of grey boulders that, like the classic pain-relief advertisement, seemed to grow the more I climbed. Eventually, that torment ended and I found myself on the skyline of the ridge overlooking (from this angle) the crazy steepness of Cavell's western bowl, the lovely lines of Verdant Pass, and a Hooker Icefields region rendered mysterious by a thick shroud of drifting smoke.

Following the ridge, I soon found fortified bivy spots and a faint trail leading upwards. With the memory of the grey pyramid still fresh in my mind, I approached a pair of high points along the ridge hesitantly (photo #7) and was relieved to discover that these weren't foreshortened. After a bit more work I reached the very top of the ridge (a 2,985m high point between Sorrow and Edith Cavell), with commanding views of Cavell's fierce looking northwest face, the Angel Glacier, and a simple looking traverse towards either of Mt. Sorrow or Mt. Edith Cavell.

The hard work is pretty much over at this point, as the traverse and remaining ascent to Sorrow's summit is a relaxing ridgewalk with huge views of the Tonquin Region and a shifting perspective of Cavell's pyramidal massing. Within 45 minutes I was standing on the summit of Mt. Sorrow, with the only difficulty being a narrow, but moderate 'bridge' linking the false and true summits... where a black insect kept buzzing past my head like I was the tower in Top Gun.

The cairn atop Sorrow was rather small and held no register, but was somehow pulsing with insect life, including a few wasps! I walked several metres away from the cairn to rest and, thankfully, none of the participants at the SFIC (Secret Flying Insect Conference) chose to abandon their workshop to pursue me.

One of the things I was looking forward to when ascending Mt. Sorrow was reaching a point where I'd get a reverse view of Cavell Lake and Angel Lake from the top, and to get these views you're going to have to venture eastward along the summit ridge into more challenging terrain (see photo #35). The narrow ridge towards the eastern tip would rate as a difficult scramble on the Kane scale; however, this is largely in response to the consistent (and significant) exposure along the ridge, rather than raw technical difficulty. You'll want to stick to the crest as much as possible — at one point I decided to drop down to a ledge on the skier's right (glacier side) to avoid what looked like a trio of hairy downclimbs ahead and wound up having to traverse a very exposed section on a narrow shelf for no real reason as I found those drops to be easy to manage on the way back. I stopped a few metres short of the absolute eastern tip of the summit ridge, as the exposure there looked to be downright giddy with the added bonus of increasingly questionable rock quality. I'm not sure where exactly the 5.9 line meets the summit ridge, but if it does it at the very tip, I'm not sure how climbers (whether male or female) are able to drag their massive balls over the threshold.

A Better Way Down

Share this report on:
Although I saw no technical reason why I couldn't retrace my ascent route, the earlier ridgewalk traverse had provided a great side-on view of a massive scree slope flowing directly from Mt. Sorrow's false summit into an easy bowl exit. That immediately struck me as a more appealing escape route, and it quickly proved to be the best way off of the mountain.

Following an obvious line to the skier's right on this massive, mellow slope with occasional scree run sections will quickly bring you down the mountain. When this descent line narrows into a small drainage and eventually cliffs out at a 5-6m waterfall, look for an easy descent gully about 10-15m to your left (which I marked with a cairn) and, when you encounter a fork in that gully, choose to continue down easy scree slopes to your left rather than returning to the drainage (that's to your right). From there, following the boulder field to the northwest will soon bring you to the forest edge where, continuing along a drainage and then stringing together gaps in the forest, I was able to rejoin the Verdant Pass trail with only having to brush through a handful of trees.

Having done the traditional western bowl descent from Edith Cavell in the past, I can easily say that this is so much better. It's slightly shorter and faster when including the traverse. The views are much better along the ridgewalk than the Verdant Pass trail. There's no downclimbing. Most importantly, there's no rockfall risk to this descent at all because it's nowhere near as steep. When Steven, Grant and I descended the west bowl, we had to stop repeatedly because we kept endangering the party below us despite being purposefully cautious in our moves.

The traverse from the Sorrow/Cavell col where the traditional descent begins to where this alternative route starts requires about 45 minutes of walking and easy scrambling. From that point, a side-trip to Mt. Sorrow's summit can be completed within 40 minutes. Had Steven or I known about these details years ago, we definitely would have had our envisioned two summit day. That said, a wasted trip to this section of Jasper is hard to fathom, and my only sorrow for this area is that I'm running out of scrambles to attempt. 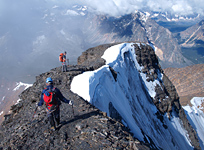 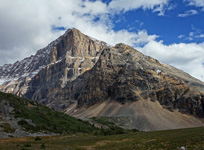 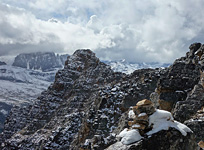