Massive views from the edge of the Continental Divide

Above: Harvey Lake and Mt. Bourgeau

An easy scramble or a physically demanding hike.

While on my first mountain snowshoeing trip in January with Ben and Steven to Healy Pass and the Monarch Ramparts I was struck by a highly prominent mountain to the northeast which overlooks this vast, open region. When I asked about it, Steven told me it was Mt. Bourgeau and an “easy scramble”. While his statement is correct from a technical standpoint, the 1,540 m (5,052 ft) of elevation one gains over 12km (7.5 mi) of consistently uphill travel makes this an ideal destination for fit hikers who possess a great deal of endurance.

However, while your legs may not thank you much for this trip, your eyes certainly will. Once you make it through the lengthy forest approach you'll be rewarded with four large, terraced alpine tarns (including the named Bourgeau and Harvey Lakes) before the views become positively massive from Harvey Pass all the way to the summit of Mt. Bourgeau. Looking over a wide open section of the continental divide, this ridgewalk provides a stunning panorama from Mt. Assiniboine in the southeast to Mt. Temple in the northwest.

Unfortunately for me, the clear weather in the morning soon gave way to rolling dark clouds in the early afternoon, which obscured Assiniboine and made lighting conditions tricky. I waited for an hour on the summit for things to clear, a period made all the more pleasant by a friendly group from the Calgary Outdoor Club, but alas that wouldn't happen until I was already descending from Harvey Pass to the valley below.

The Bourgeau Lake Trail has a signed parking area directly next to the Trans-Canada highway (Hwy 1) roughly 11km west of the Town of Banff, just past the turn-off for the Sunshine Village Road. From the parking area, you'll find the trailhead through a Jurassic Park-esque gated entranceway at the southwest end near the bathrooms.

There's not a whole lot to say about the 7.2km trail approach to Bourgeau Lake. The route is obvious, and the trail's been designed/maintained to tourist standards. Two landmarks along the way include a wooden bridge at the 3.5km mark (the views start opening up slightly after this) and a large waterfall at the 5.4km mark which preludes a steep series of switchbacks which quickly rise to a plateau where Bourgeau Lake resides.

From Bourgeau Lake, take the main trail headed to the climber's right (west) towards the obvious pass between Mt. Bourgeau and Mt. Brett. The trail will pass through a brief forest section with plentiful wildflowers before giving way to a loose rocky trail which leads the rest of the way to Harvey Lake.

The route from Harvey Lake to Harvey Pass is very obvious and involves an easy stream crossing between the second and third tarns. To reach the summit of Mt. Bourgeau from Harvey Pass, simply follow the trail to the climber's left (east) heading directly up the ridge. This trail involves some light rock hopping at its midpoint, but there is no hands-on scrambling.

Share this report on:
Once you reach the summit be sure to take the time to investigate the southeastern portion of the summit ridge beyond the weather station. Not only did I get to entertain myself by gently herding a pack of 12 ptarmigans, but I was also rewarded with a number of interesting views that you can't get from the summit.

The ascent of Mt. Bourgeau is also described in Alan Kane's Scrambles in the Canadian Rockies (pg.204). 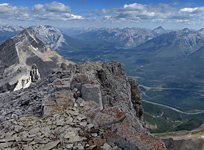 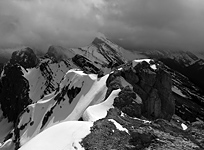 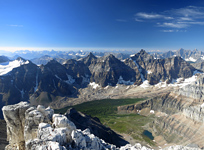