Above: The eastern view over Abraham Lake towards Nordegg from high up on Mt. Michener

A tricky access ramp to the summit ridge can be moderate scrambling when dry and full-out mountaineering when not. Seasonal timing is critical for a safe lake crossing.

For scrambles, and particularly winter scrambles, one is always at the mercy of conditions (snow, avalanche and weather) that can dictate and limit when certain mountain objectives can be attempted. However, unlike any other scramble I’ve attempted to date, the 2km crossing of Abraham Lake needed to reach Mt. Michener presents a fourth required condition: a solid ice surface.

Some friends and I were quite keen to summit Mt. Michener but were worried about the limited window of opportunity afforded by shifting ice conditions; so when all the necessary stars finally aligned, those of us who could went for it. It just so happened that the necessary conditions fell into place on Valentine’s Day this year. So instead of enjoying a romantic breakfast in bed, or running around to finalize a flower delivery or dinner plans at a fancy restaurant, I found myself on the icy shores of Lake Abraham at 6 am in the morning with Steven.

Surrounded on three sides by Abraham Lake, Mt. Michener serves as a fantastic lookout for most of the “David Thompson Country”; the area surrounding Highway 11 between Nordegg and the northern reaches of Banff National Park near Saskatchewan River Crossing. This is definitely a mountain to save for a good weather day.

As Mt. Michener begins with the crossing of a lake with countless access points, there isn't a specific “trailhead” to look for along the highway. That said, we departed from the highway roughly 38km west of the intersection of highways 11 and 40, where the David Thompson Highway dips down next to an easily accessible beach. After crossing a lightly treed field to the beach, we made our way to the icy shores of Lake Abraham and began gearing up for the traverse (please see the considerations section below for more details about safely crossing this lake). With our crampons on, we carefully walked down ice that had been wind-driven up the shore, and began crossing the lake under a gorgeous alpenglow.

The ice this morning was in fantastic shape, clearly a foot and a half to two feet in thickness, and with very little snow to conceal any weak spots. We quickly made our way across the 2km width of the lake to the distant shore while occasionally stopping to take advantage of the unique photography opportunities afforded by the crossing.

From the distant shore, it is important to head for the correct ascent ridge. As seen in this photograph, the northern ridge of Mt. Michener fans out like a trident as it descends the mountain, and of the three options, you'll want to climb the smaller ridge on the climber's right (west). We saw no trail leading from the shore to the treeline of this ridge (although there was some flagging), but thankfully the bushwhacking was fairly easy, and only the occasional snow covered slab provided any difficulty.

Although the forest isn't bad, things get much better once you crest the ridge. Not only do the views open up in all directions, but you'll find yourself on nice solid rock with all kinds of easy scrambling route options for the next several hundred metres. However, it was also soon past this point where we met our nemesis for the day: extremely strong winds.

I'm always intrigued by the seeming randomness of wind patterns around mountains. Our crossing of a vast open lake area was completely windless, but for much of this ascent ridge, we were being chilled and thrown off balance by blasting winds. Thankfully the exposure risk is quite limited along the ridge, so they merely needed to be endured.

The nice rock too soon gives way to treadmill scree as you reach the transition area of the mountain where you will need to begin ascending to the climber's left to reach the shoulder of Mt. Michener and make an attempt on its summit from the east. Steven and I like to avoid scree where we can, so we chose to climb the ridge to the left rather than following the scree route up. Depending on the route chosen, the scrambling difficulty on the ridge varies between easy and moderate, and you need to be careful about rockfall here if travelling in a group.

After a while, you'll eventually circle to the left of the summit block where you'll need to ascend a steep scree ramp, which steepens even further near the top. There aren't many good steps or holds along this slope, and just enough snow to make things slippery, so Steven and I moved our way carefully upwards through here.

After spending twenty minutes on the summit, we turned around and retraced our route down the mountain and back across the lake before heading back to Edmonton.

As mentioned, solid ice conditions on the lake are vital to a safe crossing to the base of Mt. Michener. Several days before this trip, I took an opportunity to scout the area and ascertain the conditions for myself, where I saw numerous people walking about the lake without any safety gear or traction devices (not a good idea). If scouting the area isn't practical for you, Eric Coulthard suggests (a link to his trip report is in the next section) contacting the Nordegg Ranger Station.

Even with solid conditions, it's still important to gear up appropriately. Abraham Lake is a confluence of two rivers (the Saskatchewan and Cline) and is regularly drawn from to hydrate the citizens of Edmonton, Red Deer, and countless other municipalities. The risk is not just that you could break through the ice, but that you could also be carried away from that hole by the current.

Steven and I roped up, wore our helmets and crampons, and had our ice axes leashed to our wrists for the crossing. In this fashion, a worst case scenario would see someone with a guide line back to the hole, someone to help pull them out, and plenty of pointy bits to aid climbing out and crawling away from that hole to safety. I even had a bunch of towels and blanket or two back in the car, just in case.

Share this report on:
While all this may sound like a lot of extra work and effort, the peace of mind is certainly worth it. Although Steven and I enjoyed perfect conditions on the lake, friends of ours, who have made this trip have reported far more nerve-wracking experiences.

Steven and I based our ascent route on our friend Eric's trip report. 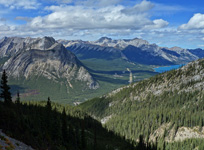 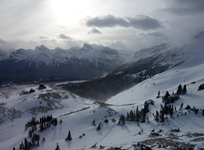 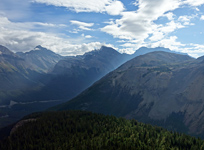