A grand reward for being curious

Above: A lovely Icefields panorama unfolds with Boundary Lake in the foreground.

An easy ridgewalk that extends to a moderate scramble with an evil, overhanging notch that denies access to the last few metres.

Although a sub-peak to nearby Nigel Peak, “Nigel Peak South” is a substantial mountain in its own right and offers both unique and exceptional views of the Icefields region, the Brazeau River Valley, and the many noteworthy peaks to the south along the Parkway. Best of all, you're virtually guaranteed to have the entire mountain to yourself to enjoy these vistas, despite the general popularity of the area.

I initially became curious about Nigel’s southern summit while reading about a ridgewalk (in Potter’s book) that follows Nigel’s southwest ridge, immediately to the peak’s west. Investigating the area in Google Earth, on topographic maps, and through photos taken from nearby peaks suggested a direct ascent from the ridge to its summit could be possible. However, I couldn't find any mention of anyone making such an attempt anywhere; and the thought of discovery changed what had been a curiosity into one of my must-do objectives for the season.

Over the summer I took advantage of trips up Mt. Athabasca, Mt. Wilcox and Nigel Peak to scout the south summit. Although each of these trips re-affirmed the plausibility of my plans, it took me a while to commit to an ascent. After an early-season snowstorm dumped a foot of fresh snow over the Rockies, I realized that my window of opportunity to climb it was rapidly closing and decided to take advantage of a bluebird forecast for the following weekend.

Leaving late from Edmonton, I arrived at the Hilda Creek parking area a little after midnight and began re-arranging my car to “camping mode”. The sky was clear, and the entire valley was bathed in moonlight; promising both colder temperatures overnight and better snow conditions in the morning.

Those promises were kept; by 4 am I had to fully bury myself in my sleeping bag while wearing multiple layers to keep warm, and the foot of mostly dry powder snow in the region had developed a nice, solid crust that would prove helpful to me throughout the day ahead. I woke up at 6:00 am and began walking towards Hilda Creek at 6:30 am by headlamp.

Despite my deep physiological aversion to mornings, I love making “alpine starts” in the Icefields region. Walking up Snowcoach Road by myself towards Mt. Athabasca under clear, moonlit skies remains one of the greatest moments I’ve enjoyed in the Rockies. Every mountain in the valley was instantly recognizable, yet bestowed with a new elegance in the softened light; and in the absence of the bustling tourist activity, the region took on a relaxed air, becoming a place of silence, tranquillity and escape. With the only sound coming from my footsteps, and motion from my headlamp as it swept the landscape ahead, the world took on the feel of a serene projection, and one that existed solely for me; as though the masterful construction of a vivid imagination.

Anyway, I enjoyed a similar experience as I left the parking area at Hilda Creek, crossed its namesake (which had frozen solid overnight), and began making my way through a sleeping forest. Despite a few necessary course corrections, I soon found myself headed towards a weakness in the ridge just as the first rays of dawn began to show on the eastern horizon.

The open southwesterly vistas from both the ridge and south summit make this an excellent vantage point to catch a sunrise, and I had timed things perfectly. As I was making my ascent of the southwestern ridge, the sun was slowly making its descent to the valley floor. Every time I stopped to enjoy the view of this fantastic area, it had changed significantly with the light.

As I arrived at the area in darkness, I didn't get a great chance to scout the approach. Unsurprisingly, I found and followed a much easier route in daylight on the descent; which is what I'll use for this route description.

To access that route, look for a paved pull-off area next to a berm on the north side of the Icefields Parkway (Hwy 93), 100m east of the Parker Ridge parking area (which in turn is 9km south of the Icefields Centre). On the other side of the berm, you will find a de-commissioned fire road, which you need to follow north for a few hundred metres until it begins curving to the east. At the curve, head down the hill to the left and look for a decent spot to traverse Hilda Creek.

From this open meadow, you should have a very good view of the first section of the ascent route. As seen in this image, you'll want to make your way through a fairly open tree section towards a scree ramp that leads up to an obvious weakness in the ridge. Only the last section requires some easy hands-on scrambling.

Once on the ridge, you'll enjoy the best views of the region by following near its western edge. The grade through this area is gentle and is strictly a ridgewalk on a mixture of solid rock and scree. Around the halfway point of the ridge, you'll encounter a very large cairn, which may be a memorial cairn as it doesn't seem to be marking a highpoint or key location. This was the only cairn I encountered on the entire trip, but thankfully the route finding on Nigel Peak South is very easy until you near the summit ridge.

You have two route options upon reaching the top of the southwest ridge, as seen in this photo. The left route is certainly more direct, and will get you to the summit faster; however, the route to the right will not only bring you to a very cool cave (on the climber's left in the ascent gully), it will also provide you with much earlier views to the east.

The snow conditions helped me considerably on both routes; giving me firm steps to use on the way up, and sufficient depth to allow plunge-stepping the entire way down. In drier conditions, I would expect a similar slog, on very loose rock and scree, that climbers encounter on Nigel Peak. It may not look like much distance to cover from the bottom, but the climb from the top of the southwest ridge (roughly 2,555m) to the beginning of the summit traverse will see you gain about 400m in elevation.

Assuming you took the cave ascent gully, you'll top-out on a rocky plateau that eventually cliffs out as you head north towards the summit ramp. To detour this obstacle, follow the cliff to the climber's left and then a few metres back towards a brief section where you will need to duck under an overhanging rock, after which you should find a narrow gully that allows you to descend 3m below. Take note of the level of where you're at on the mountain at this point; you're going to want to stay around this elevation for much of the traverse towards the summit.

The traverse from the rocky plateau towards the summit ramp will lead you through an area with numerous downsloping terraces and exposed gullies. The firm snowpack was highly beneficial through here as every step I made held me in place. I don't know how difficult this traverse would be under dry conditions; it may be fine, it may be very loose — exercise care.

The key thing for this section is to fight the urge to angle towards the ridge crest early, as you'll certainly end up having to downclimb when you become cliffed-out at the few gullies which divide the area. The route looks a little like this from the rocky plateau, and you can make out the traverse route I took from my footsteps in this photo as I looked back towards the spot I took the first photo.

There is a summit plateau to the north of this highpoint which looked to be another 5-6m higher and would provide clearer views to the north and northeast; however, to get there, you would need to traverse a nasty looking notch. The notch is about 4m wide and has a gully that slants steeply to the west. I looked for a safe route into that gully and couldn't find one with the snow around, so entering this gully may require a repel. If you fall or slip once you're in this steep gully, you'll have about a 10-15m run-out to stop yourself before plunging off a 40m cliff... where your momentum would then probably carry you over a few more cliffs. Lastly, the far side of the notch has a chimney which should greatly help with its ascent; however, the first 4-5m of that chimney is overhanging... and over the lower part of the scary gully. Given the risk/reward ratios at work here, I suspect that nobody has attempted to cross this notch.

Share this report on:
Once you've contemplated the notch and decided that you're more than happy to consider where you're standing as being a successful summiting (especially if you've already been up to the 3,211m true summit over at Nigel Peak), simply retrace your steps for the traverse until you reach a point where you can see that it's safe to begin a descent towards the southwest ridge. From there, enjoy the views on the way out along the ridge, down the scree hills, and then back across Hilda Creek.

The ascent of Nigel's southwest ridge is also described in Mike Potter's Ridgewalks in the Canadian Rockies (pg.208). 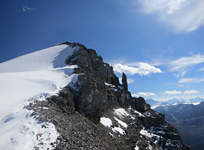 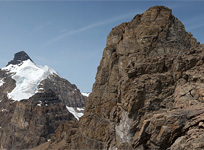 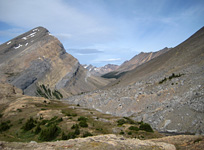