Above: The impressive southern summit view from Roche De Smet

A long approach gives way to fun, moderate scrambling. Avoid the alternative descent route as it's difficult and hazardous.

Roche De Smet is a surprisingly great scramble that, if you're up to the physical demands of the journey, you'll want to do very soon. With Parks Canada making plans for an extensive burn in the Vine Creek Valley to encourage new growth and greater species diversity, the 8km trail approach to the ascent ridge could become a nightmare to navigate soon, if it even remains accessible.

[2016 Update: The burn was much smaller than feared, and you may only encounter issues near the Vine Creek trailhead.]

Similar to Mt. Greenock (a southern sub-peak of De Smet), this mountain's perfect location on a bend in the Athabasca River Valley offers a spectacularly broad view of Jasper National Park, spanning from Roche a Perdrix at the eastern gates all the way to Brussels Peak far to the southwest (72km!.. and including landmarks such as Pyramid Mountain, Mt. Edith Cavell and Mt. Fryatt). Unlike Mt. Greenock, however, De Smet also offers vast northern views into the North Boundary Trail region and Wilmore Wilderness Park; not to mention a direct line of sight to the massive eastern face of Mt. Robson (the tallest mountain in the Canadian Rockies).

The Vine Creek trailhead can be reached by following the Celestine Lake Road from Hwy 16 (look for signs for the Snaring Campground). If you have an SUV or a truck, you can ford Corral Creek and drive right to the trailhead where there's a small side-road with parking and a turnaround. If you don't, like me, you'll be starting your day from the Corral Creek turnaround. The start from Corral Creek will add 4km to your day, but it's a pleasant walk, and I've had memorable wildlife sightings both times I've had to do it.

From the Vine Creek parking area, you'll want to follow what looks to be vehicle tracks up a slope to your right. This is the trail, which you'll be following for the next 8 kilometres. The trail rarely ventures far from the creek; you'll want to have bear spray handy and to make regular calls in areas that are noisy or offer limited visibility. I didn't see any bears, but they had left a few “fresh deposits” along the way.

Despite being told that the trail hasn't been maintained for years, it was in much better shape than I expected. There's very little in the way of deadfall, and I'd say that less than 3% of it was washed out, flooded, or overgrown. There are only two creek crossings along the entire route and, unfortunately, both bridges are gone. In both cases, I found reasonable places to rock hop within 10m to the north.

There's not much else to say about the trail other than you don't need to go all the way to the campground. Once you start catching glimpses of the ascent ridge through the trees on your right (see photo #6, reverse view in photo #13) you'll want to turn up the first drainage you see that head's in its direction. If you miss the creek and arrive at the (somewhat abandoned) campground, you will need to bushwhack on a southeasterly heading until you join that creek further up the mountain.

Once at the creek, stick to a high line on the left bank until you clear the main treeline (see image #8) where you'll have a good vantage point of your ascent route (to the climber's left) and descent route (the gully and scree ramp which curves to the climber's right). Although heading left here may seem indirect (and it is), you'll get to gain all of that elevation on solid rock and vegetation.

Getting halfway up the ascent ridge will give you your first good views to the north, and then when you finally crest that main ridge... you'll have your WOW moment of the day. After 3+ straight hours of the same forest, the same creek, and the same damn brown rock, you'll be awestruck by the lush vastness of the Snake Indian River Valley, the Celestine Lakes, the several other visible lakes, and a whole new set of mountains to look at.

I've used many words to describe ridges over the past few years but the one that occurred to me while heading all the way to the top of the intimidating looking summit block of De Smet was something completely unprecedented. That word was “considerate.” I stuck to the crest as much as possible for the ridge walk and summit assault, and every time I thought I might get cliffed out I'd peer over the edge and see an easy series of steps down; every time I came to an obstacle that was too sketchy to tackle head-on, the first detour I'd think of trying worked, and worked perfectly. Every mountain should be built like this. Someone should get on that.

Two obstacles that I can remember include tall blocks on the crest ridge just before the first “tower” of the summit section (see image #26) which could easily be bypassed to the climber's left. The second obstacle came around the second “tower” which looks like an impenetrable 10m cliff at first, but which a quick bypass to the climber's right leads you to a neat series of steps that head up the centre, and then to the top, of that tower. Aside from those instances, you'll want to stick to the crest.

This section has no crux step per se, but there are some fairly exposed sections. Once you reach the summit, you'll be treated to your first views, assuming the weather's reasonable clear, of Mt. Robson to the west. Once you're done taking in the views, retrace your steps all the way back to the easy descent gully I identified earlier.

Do not follow the descent route in the GPS track! My friend Ben had taken this route during his trip the previous fall, and apparently, he's the master of understatement. The gully leading directly down from the summit block looks perfectly reasonable from above, and it is until you reach the treeline. At that point, the drainage creek turns into a full out canyon with a series of large waterfalls that I've now dubbed “Hell's Half Kilometre.” Sure, this direct line will save you a few kilometres on the return trip over the route I recommend here, but it's slower and far more dangerous.

This entire section is technically demanding on a continuous basis, with every necessary bypass attempt involving exposed traverses and careful descents of downsloping slab sections. At its most ridiculous, the only way I could find my way down through one slabby cliff band was to wedge myself between a fallen tree and the slope, and then slide from hold to hold on that tree like a mechanic wheeling underneath a car.

I thought the worst was over when I reached the last waterfall and saw an easy scree slope on the skier's right leading to lengthy (and thankfully mellow) hiking section through the forest. However, as soon as I stepped out onto that slope, the top 4" of material above and below me completely gave out, and I found myself in a small landslide. I've never had to self-arrest on rock before, and I hope never to have to again. At first, I drove my palms as hard into the ground as I could and then grabbed for any large rocks that became unearthed by the slide. I managed to stop myself within the first 6 metres and watched while the rest of the material sped down the remaining 12 metres of the slope before slamming into the creek below.

Share this report on:
I don't normally use this space to rave about gear, but this misadventure helped highlight just how awesome my Mechanix Wear gloves are. Given how I had just used my hands to arrest a slide, I expected them to be a mess. I had some cuts to my legs and arms but, to my amazement, not only were my hands uninjured, but the gloves weren't even torn! If you're looking for something to protect your hands while scrambling, don't waste your time with anything else (although it would be nice if they toned the branding a little).

After recollecting myself, and my equipment, I very carefully made my way down the rest of the slope and then got the hell out of there. After an uneventful eternity along the Vine Creek Trail, I was back to the Celestine Lake Road and the relaxing walk back to the Corral Creek parking area. 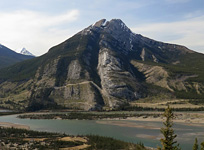 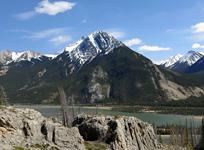 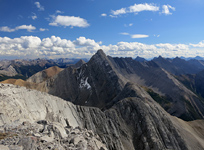