Above: The intimidating north face of Mt. Forbes

My ascent of White Pyramid remains one the most memorable days I’ve ever spent in the mountains and among its spectacular views was the striking vision of Forbes’ east face, rising like a graphite blade hundreds of metres above where I stood. Although I was quickly learning my way through the beginnings of a mountaineering vocation, the thought of scaling something as remote and foreboding as Forbes seemed a total improbability; a someday objective that felt beyond my ambitions as a climber.

As with many things in life my point of view changed over time. After being inspired to work towards an ascent of Denali, something requiring years of preparation unless you want to be reckless, Forbes struck me as a logical stepping stone. I figured I’d work on building my skills, grow my experience and then look to tackle the mountain in a few year’s time. Then, of course, some friends decided to tackle the mountain and invited me along a few weeks later.

Hey, you’ve got to capitalize on the opportunities you’re given.

Taking advantage of a fortuitous weekend high-pressure system, Vern, Anton and I would venture past Glacier Lake to the toe of the Mons Glacier, and from there tackle the tallest mountain in Banff National Park.

The Glacier Lake approach to Mt. Forbes has a reputation for being unpleasant; it's a long trek necessitating numerous stream crossings and bushwhacks. However, the months leading up to this trip saw a below average winter snowfall and an exceptionally dry spring in the mountains. As I was driving through Jasper on the way to Saskatchewan River Crossing, I couldn’t help but notice how low the water levels were in that park, with numerous dry stream beds and entire braids of the Athabasca missing. While this portended good things for our approach, I would hate to see this become the norm in the Rockies.

After a good night’s rest at the Rampart Creek Hostel, we quickly made our way to the trailhead (the signed Glacier Lake one, a kilometre north of Saskatchewan River Crossing on the Parkway) and were soon following a wide, mellow path towards the lake. The unfortunate thing with the Glacier Lake Trail is that the trail ascends a significant ridge on the lower flanks of Survey Peak, and every inch of those 262m you gain must be immediately surrendered on the other side. Despite the tragic gain and loss of elevation, we did well in reaching the lake (8.7km from the trailhead) in under 2 hours. After a brief break, we followed a solid path around the lake and on to the flats of the Glacier River beyond.

From the lake to the headwaters of the Glacier River at the foot of the Lyells, we did our best to follow any path available, sticking to the climber's right/right-centre of the valley the entire way. At some points there was a clear trail to follow, others we took advantage of dry creek beds, and only suffered a few bouts of bushwhacking as we tried to string together clearings. After that work, we were quite relieved to reach the valley headwall, and delighted by the views of the Lyell icefall and the collection of the lakes at its feet. Hardy hikers sometimes fight their way back here and surely find their efforts rewarded.

Needing to head southwest from this point towards the Mons Glacier, we were concerned about the potential for a deep river crossing but were pleased to find a spot where the water was only shin-deep. After a break on the other side, we located a trail and then began our way up a lower ridge of Division Mountain towards the moraine we needed to reach. The trail's overgrown in stretches (a real annoyance with snowshoes hanging from my pack, and I can't imagine the fun with skis) but isn't too difficult to follow. After you've gained a couple of hundred of metres in elevation you should reach the moraine, and from there the trail's a straight shot to the point where you need to choose how you'll gain the Mons Glacier; whether via a steep gully that bisects the headwall, or a bypass up Division Mountain to an intermediary ridge.

The decision for us was easy on this day. The gully, which our friends Ben & Steven had reported as requiring a “few low 5th class moves”, was completely choked up with snow and ice and had recent signs of avalanche activity. On the other hand, the bypass route up Division Mountain looked safer and technically straightforward. Cautious of the potential for an avalanche, we stuck close to the trees while ascending Division's lower slopes, which led to a few fun instances of bushwhacking up a steep slope in thigh-deep snow, but we persevered. Once we topped out above the trees, there was an obvious diagonal bench which guided us across the mountain to where some moderate scrambling allowed us to gain the ridge and catch our first glimpses of the Mons Glacier and the aesthetic peak for which it's named.

From the ridge, a quick descent on easy scree slopes brought us to an outflow stream and soon after we found a perfect bivy spot near a tarn at the foot of the Mons Glacier, and settled in for the night.

Getting from the trailhead to our bivy spot took 9.5 hours, with us gaining over 1,500m vertically (accumulated) and covering 24.8 km along the way.

We awoke early the next morning to a clear night and, after a hasty breakfast and last second gear check, we left camp at 4 AM heading towards Forbes' north glacier.

We stuck to the centre of the glacier through its lower sections, transitioning between snow and a few exposed ridges as we went, whichever offered the easiest way forward. Roughly midway up the glacier we put on our snowshoes, roped-up, and started following a mellower line on the glacier which began to the climber's left and slowly curved to the right as we neared Forbes' north face. With a good night's freeze, and plenty of snow solidly bridging the glacier's crevasses, we made good time with our ascent and found ourselves staring up those slopes a little after 7:30 AM. Although we were already near 3,100m in elevation, with expansive views to the north, there was still a lot of mountain to go!

Parties on Forbes are often turned back by exposed ice, but we were fortunate to have solid snow to kick steps into all the way up the north face after ditching our snowshoes and switching to crampons. Crossing the bergschrund presented no difficulties, and we soon reached the mountain's west ridge on a diagonal ascent line, but wouldn't gain it until completing a short traverse to the left under a rocky cliff band and then ascending a narrow snow gully to a broad balcony.

Being only 140m shy of the summit with seemingly perfect conditions, we were feeling pretty awesome. However, things were about to get complex and daunting.

From the balcony, there was only a narrow arete lying between us and the gentle snow slopes leading to Forbes' summit. To gain that arete we needed to ascend a short triangular snow slope with a solid looking wind crust. While Vern hung back to take photos of the massive views on display, Anton and I (with Anton a few metres ahead) began up the slope when it happened. Without warning, a crack appeared and spread across the slope like in a cartoon. Out of pure instinct, I dashed to the climber's right and, through a flying mixed-calculation of distance to the slide's periphery and my available time, made it as far as I could before planting hard into a self-arrest position... and watched as Anton was swept past me by the avalanche.

Anton managed to stop himself a few metres below me, unharmed; while I, in my exuberance to cling to the slope, had managed to smash my thumb so hard that, while unbroken, it would take half a year to regain a painless full range of motion. It was a shallow slab slide, maybe 8-10" at the most, but it was enough to sweep someone off their feet. In hindsight, with a short slope, a flat run-out, and no immediate cliffs or crevasses, this was probably the ideal place along our route for such an incident; but at the time, we were left rattled and the slide had cast everything into doubt.

As one can imagine, it was at this point the classic mountaineering debate of whether to continue or retreat took place both within and between the three participants of our trip. Ultimately, some people will feel the need to judge, but that's so much easier when you're not the one who's standing 98% of the way into a monster effort, with so close to realizing your goal. After some time and deliberation, we chose to proceed.

Travel along the arete was impeded by a continuous small cornice, that Vern and Anton awkwardly knocked off, as we ascended. The southern side of the ridge reacted to the falling cornice debris with some small slides, while the north face (our descent line), thankfully, did not react at all. Having traversed the arete, we found ourselves plodding to the top on a mix of snow and dinnerplate-like rock up gentle slopes to the apex of Banff National Park.

With barely a light haze in the sky, the views from Forbes' summit were immense this day, with everything between Mt. Columbia, the Goodsirs and a massive section of British Columbia in clear view. With avalanche danger on our minds, we didn't linger for long at the summit and made a swift descent back to the balcony, and then down the north face to where we had left our snowshoes.

We greatly enjoyed a mellow descent of Forbes' sunny northern glacier, stopping now and then to look back and marvel at the giant we had stood atop that morning. Although the mountain had been windless for our ascent, conditions had changed swiftly, and we could now see a long snowy scarf flowing from the summit in a westerly gale.

Upon returning to our camp around 4 PM, we decided to take advantage of the available daylight to commence our return and greatly shorten the hike out on day 3. The overgrown portions of the moraine trail would repeatedly yank my snowshoes from my pack, and test my potential for outright homicidal rage, but we eventually made it to a lovely camping spot a few kilometres south of Lyell's glacial lake. Sleep came quickly and easily that night.

Share this report on:
Having completed most of the vertical work the day before, we awoke on day 3 facing a long, but certainly unrushed, 18km hike back to the trailhead. We were able to make several optimizations to our route on the way out, so that's the line to follow if you choose to re-trace my GPS data.

While on break at Glacier Lake, Anton introduced me to the marvel that is chocolate-covered espresso beans. After consuming a handful of these miracle workers, which you can lawfully attain at your local bulk foods section, without a permit, I heard witness accounts that I had ascended that blasted ridge on Survey Peak “like a rocket ship”. They're now a regular part of my food arsenal on big trips.

Aside from some oppressive heat, the hike out was otherwise unremarkable. We said our goodbyes at the trailhead, and then I alone was left to the disappointment of a Saskatchewan River Crossing that hadn't received its ice cream shipment yet. 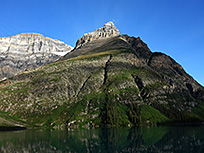 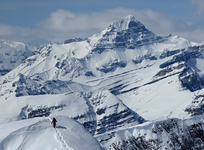 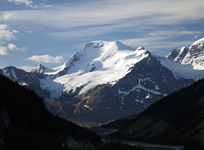